In a bizarre case, house of retired naval officer demolished, looted in alleged connivance with police in Clementown area of Doon

In a bizarre case, the British era house of a deceased naval officer in Clementown area of Dehradun  city was razed to the ground and all the belongings looted by the land mafia in alleged connivance with the police. Kusum Kapoor, wife of the deceased naval officer was residing in the said property with her mentally challenged daughter and had gone to NOIDA on January 7, 2022 for some work when her house was raided and demolished.

Kusum Kapoor talking to media persons in Dehradun on Friday recalled her horror when she was informed by her neighbours on telephone on January 12, 2022 that her house is being demolished with the help of JCB machines and tractors. Giving details of her  property, she informed that the maternal uncle of her husband Mohinder Malik had purchased the property in 1996 and allowed her husband Commander V.K. Kapur to reside and look after the property. 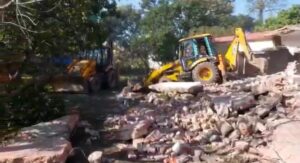 Finally, after running from pillar to post, she finally went to meet Ashok Kumar, Director General of Police, Uttarakhand  who ordered an inquiry into the case and ordered that a case be registered against the alleged culprits. An FIR was registered under sections 147, 452,447,427,323, 506 of the IPC.

Interestingly, the women came to know about the modus operandi of the land mafia. A case was filed in civil court in Dehradun by one Amit Yadav, a native of Uttar Pradesh seeking cancellation of sale deed of Mohinder Malik but in a bid to circumvent the due process of law, the address of Mohinder Malik was wrongly mentioned in the petition so that the defendents do not get to know about the case.  Mohinder Malik had passed awayyears ago but still he was made a party in the case and an ex-parte order was obtained cancelling the sale deed.  But the even with an order of cancellation of sale deed, Amit yadav had no right to enter the property, loot the belongings and demolish the building. 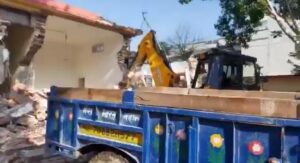 Kusum Kapoor alleged that no effort has been made by the police to recover her household goods which included the medals and trophies of her late husband a distinguished naval officer. She further charged that  FIR has been registered under milder section in a bid to save the culprits.

Meanwhile, the case has shook the civil society and the retired defence personnel residing in Clementown area. However, a departmental inquiry has been ordered by the DGP Ashok Kumar in the case. But the old lady and her daughter are running helter skelter  to everyone who matters in the city to get justice.