In a bid to outsmart the ruling Bharatiya Janata Party (BJP) in it’s campaign of ‘nationalism’ and ‘Hindutva’,  Congress has come up with an aggressive strategy to counter the ‘Sangh Parivar’ on these two issues in the run up to the Uttarakhand state assembly election scheduled to be held early next year. The strategy to take on ruling BJP and the ‘Sangh Parivar’ was much in display at the ‘Vijay Samman rally’ of the Congress party addressed by former Congress President Rahul Gandhi on December  14 at parade ground in Dehradun.

After the public pronouncement by Rahul Gandhi of being a Hindu and vowing to fight ‘Hindutva’ as espoused by the ‘Sangh Parivar’, the Congress party came up with an aggressive strategy to publicly embrace ‘Hinduism’ and robust nationalism at it’s Dehradun rally. In Uttarakhand, which is a upper caste Hindu dominated state with large majority of defence personnel, the party has decided to go all out with these two emotional issues much to the chagrin of the BJP. Throwing away any pretence of showing itself as ‘secular’ and being pro-Muslims, the Congress party resorted to using Hindu rituals and symbols in the rally to convey a clear cut message to the electorates. The Congress party has decided to usurp the agenda of Hinduism and nationalism of the BJP in the Uttarakhand state assembly polls.

It was for the first time probably that a ‘havan’ and  ‘puja’ was performed at the venue prior to the rally. Senior Congress leaders including the state co-incharge participated in the ceremony.  At the rally dias, Hindu ‘purohits’ did recite mantras for ten minutes before Rahul Gandhi spoke. The party also tried to gave an impression that it honoured the ‘Teerath Purohits’ of Hindu temples who were agitated following enactment of the Devasthanam Board Act, which after backlash has been taken back by the state BJP government. 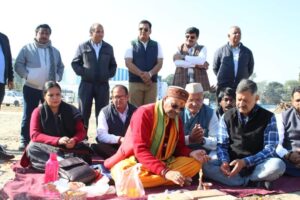 The holding of “Vijay Samman rally” to commemorate Bangladesh war of 1971 and honour the war veterans and families of martyrs was a clever move to counter the BJP “ Shaheed Samman Yatra”  which they undertook to visit the families of martyrs of Indian army since First World War from November 17. The BJP concluded its’ yatra on December 15, a day before the Rahul Gandhi rally with the foundation stone laying of “Sainik Dham” by defence Minister Rajnath Singh. The earth collected from the homes of martyred soldiers will be used in the proposed “Sainik Dham”. The main gate of this memorial will be named after first Chief of Defence Staff General Bipin Rawat, who died in a helicopter crash on December 8.

The Congress in its’ rally next day used a huge cut out of General Bipin Rawat and observed a two minutes silence at the start of the rally in his memory. Rahul Gandhi in his speech eulogised the sacrifices of the soldiers of the Indian Army. Hitting out at the divisive policies of BJP, he mentioned that the 1971 war was won in mere 13 days since the country stood united.  He also deplored the attempts to undermine the role played by his grandmother former Prime Minister Indira Gandhi, who led the country to its’ greatest military victory. 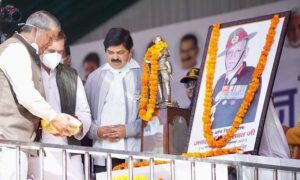 The Congress also decided to take out a three-day ‘yatra’ to commemorate General Rawat from his village in Uttarakhand on his ‘terahvi’. The ‘yatra’ will begin from either December 20 or 21, whichever day happens to be the ‘terahvi’, the day that marks the end of the mourning period in many Hindu families. The three-day campaign will be launched by Pradesh Congress Committee president Ganesh Godiyal.

Congress leader and former state assembly speaker Govind Singh Kunjwal will launch another ‘yatra’ — part of the same initiative — on the same day from the village of the first army chief from Uttarakhand General BC Joshi in Kumaon. Both the Garhwal and Kumoan regions, are home to Garhwal and Kumoan regiments and provides manpower to the Indian army.

All these things have unnerved the ruling BJP which has attacked Congress for using the name of General Bipin Rawat. Uttarakhand Chief Minister Pushkar Singh Dhami in a statement said that Congress party which had called General Bipin Rawat a “Gali ka Gunda” is indulging in rhetoric for political gains. The massive crowd at the Rahul Gandhi rally and aggressive strategy to usurp the issues of nationalism and Hinduism  by the Congress has started to unnerve the ruling BJP which claimed exclusive right over these issues. However, only the outcome of the elections will tell about the success of the Congress strategy.