Born and brought up in Srinagar, Khan has acted in and has directed more than two dozen stage plays since 1988. He is one of the leading filmmakers of Kashmir and for the last more than three decades he has produced and directed more than 400 documentaries, telefilms and episodes of serials. He also produced music albums for DD Kashir, DD Urdu, J&K Tourism.

Having completed his post-graduation from Kashmir University in 1982, he has also done Research in the ‘Eco-Development Project’ at Kashmir University (1983). Diploma in Forensic Science (Ballistics) from ‘Institute of Criminology & Forensic Science’, New Delhi (1984 – 85). Diploma (Hindi) from Central Hindi Directorate (1987 – 88). Khan has been awarded, honored & felicitated from time to time by the state cultural academy, other prestigious organizations and associations for his contribution in the field of theatre and filmmaking. 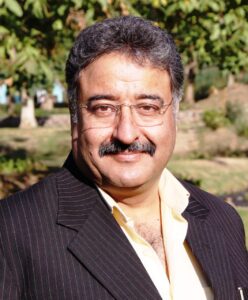 He is the first filmmaker of the valley, who produced & directed documentaries for UGCs countrywide classroom through AVRC of Kashmir University.

He is the founder and director of the ‘Kashmir World Film Festival’, a first of its kind in Kashmir. He is also working as a Consultant with North Zone Cultural Centre (NZCC), Patiala at its Srinagar office. He is also the Chairman of ‘Actors Creative Theatre’ (ACT), an organization, active in the field of Art, Culture, Film & Literature, since 1976.

Khan was awarded a ‘senior fellowship’ in the field of folk theatre for a period of two years by the Ministry of Culture, Govt. of India (2009 – 2011)

Till date, Khan has been felicitated with hundreds of awards. He was  felicitated” by ‘Sarhad’, a Pune-based organization, at Pune for successfully organizing Film Festivals in Kashmir, (30th Jan 2019). He was honoured for his contribution in the field of theatre by ‘Chinar  Art  Foundation’, at Jammu (17th March 2018), Infotel Award” for his meritorious services in the field of “Theatre, Radio & Television”, (12th Nov. 2017). He was presented with a “Award of Honour” for his meritorious services in the field of Theatre and Film Making by “All Artists Welfare Association Jammu”  (22nd Dec. 2016 at Jammu).  A short film titled “Sula Mout” directed by him was awarded by J&K Academy of Art, Culture & Languages. The award was presented by the Speaker of the State Legislative Assembly Kavinder Gupta (12th Oct. 2015). 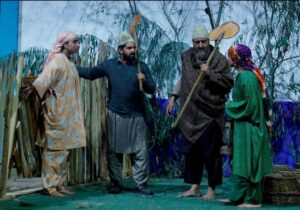 He also got the “Best Direction” and “Best Set Designer” for the stage play “Taqdeer Saaz” in the Theatre Festival of J&K Academy of Art, Culture & Languages. The play was also awarded Best Production and got a total of nine awards, (25 May 2009). He has conferred with awards and honours for his outstanding work in the field of theatre and film making in the past three decades.

Khan has got many achievements to his credit. He has been awarded a ‘senior fellowship’ in the field of folk theatre for a period of two years by the Ministry of Culture, Govt. of India (2009 – 2011). Has worked as a subject consultant in the Hindi Feature film “Tahaan”, directed by Santosh Sivan (2007-08). The documentary film titled “Kashmiti Music” produced & directed by him in 1994 was screened in the International Film Festival, held in Srinagar, organized by the Films Division and J&K Academy of Art, Culture & Languages (June 2007) and others.

Khan is a very dedicated cultural activist of J&K and has been consistently working for the cause of art and artists. Recently he was very active in getting the auditorium of Tagore Hall renovated which is the only auditorium of Kashmir  to stage professional plays.