Both, the ruling Bhartiya Janata Party (BJP) and main opposition Congress party have been pulling out all the stops to woo ex-servicemen, serving defence and paramilitary personnel, who form a sizeable chunk of voters in Uttarakhand, in the run-up to the coming state assembly elections scheduled to be held early next year.

While, the ruling BJP will come up with inauguration of a ‘Sainik Dham’ to commemorate the sacrifices of martyrs of Indian army since World Wars till recently, on December 15, Congress party has decided to counter the BJP narrative by holding a “Sainik Vijay Samman Diwas” rally on December 16, to commemorate the Bangladesh war victory of 1971 at Parade ground, Dehradun.

Former Congress President Rahul Gandhi will address the rally. He will honour the war veterans, martyrs and ex-servicemen and their families on the occasion on 50th ‘Vijay Diwas’ of Bangladesh liberation war led by former Prime Minister Indira Gandhi.

According to Congress party leaders, he will also pay homage to General Bipin Rawat, Chief of Defence Staff (CDS) and other defence personnel who died in a helicopter crash on December 8. A son of the soil, General Bipin Rawat hailed from Pauri Garhwal, had his schooling from Dehradun and revered and respected by the defence personnel of the state. The Congress party has been making full preparations for the “Vijay diwas” rally which would also kick start the election campaign of the party in the hill state. Already, Prime Minister Narendra Modi had addressed his first rally in Dehradun on December 4 and expected to address another one in Haldwani or Rudrapur on December 24.

During the run up to the state assembly polls of 2022, the BJP has been working overtime to drum up support amongst ex-servicemen and serving defence services personnel and their family members.

The ruling BJP had started its “Shaheed Samman Yatra” from November 17, 2021 which was flagged off by party President J.P. Nadda from Sawad village in Deval block of Chamoli district. The village is dominated by serving and ex-servicemen. The BJP ministers and leaders including Uttarakhand Chief Minister Pushkar Singh Dhami has been visiting the families of the martyrs as part of the yatra. The BJP has been collecting the earth from the houses of all the martyrs of the state which would be used in making “ Sainik Dham” at Guniyal Goan in Dehradun. Defence Minister Rajnath Singh is expected to inaugurate the “Sainik Dham” memorial to commemorate the martyrs.

Ironically, BJP leaders had to face embarrassing moments when atleast three families refused to give earth from their homes, citing negligence and non-fulfilment of promises made to them at the time of martyrdom of their near ones. However, the “Sainik Samman Yatra” will cover all the 13 district and 70 blocks of the state and conclude at Dehradun on December 15. The earth collected from the homes of the martyrs would be worshipped and to be used in the “Sainik Dham”.

The ruling BJP had banked heavily on the ex-servicemen, families of serving personnel and para- military personnel since the Kargil war of 1999 by projecting it’s agenda of ‘nationalism’. 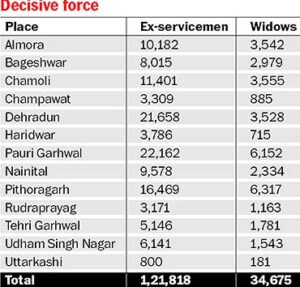 The state government figures reveal that there are more than 1.2 lakh ex-servicemen in Uttarakhand, while more than 1 lakh are currently serving the defence forces. Nearly 1 lakh people in the state retired from the paramilitary forces and more than 1 lakh are still serving. There are 34,675 widows of defence personnel in the state. So, these families constitute a major vote bank, which is being eyed by various parties.

After the state assembly elections victory in 2007, Khanduri was made the Chief Minister of the state. To counter the influence of Khanduri among ex-servicemen, the Congress brought Lt Gen TPS Rawat (retd), a former Director General of Assam Rifles, who remained a minister during the ND Tewari-led Congress government from 2002 to 2007. After differences with the Congress leadership, Lt Gen Rawat resigned from the Assembly in 2007, and joined the BJP. He contested the Pauri Garhwal by-election, necessitated due to the resignation of Khanduri, who became the Chief Minister after the 2007 Assembly polls. Lt Gen Rawat won the 2007 by-election, but lost the 2009 Lok Sabha elections to Satpal Maharaj of the Congress, his one-time mentor in the party.

The Congress and the BJP both had used former Army generals to get ex-servicemen votes in the previous elections.

Lt Gen MM Lakehra (retd), who aligned with the Congress, was later made the Lt Governor of Puducherry. Lt Gen Gambhir Singh Negi (retd), a former Commandant of the Indian Military Academy, who was also the chairman of the state Public Service Commission, campaigned for the Congress party. (ends)