A straggler from old Punjab

The only time I saw the lady was in the summer of 1943, when I was a young lad of 13, and we lived in Anantnag in South Kashmir, where my father was posted as the magistrate. This brief encounter left a vivid impress on my mind and it is only in the later years that I read-up and fully realized who the lady was !

Born 146 years ago, her formal card  said “Her Royal Highness, Princess Bamba of Punjab, Jammu and Kashmir and Beyond” – ‘Beyond’ presumably being the conquests of that redoubtable Dogra, General Zorawar Singh in Baltistan, Ladakh and Western Tibet, when the Jammu Dogras were still the faithful vassals and courtiers of the magnificent Lahore Durbar of the ‘Lion of Punjab’. The lady also styled herself variously as Princess Bamba Jindan (after her grand-mother, Rani Jindan, wife of Maharaja Ranjit Singh) and Mrs Bamba Sutherland (she married Colonel DW Sutherland of Indian Medical Service).

There was much excitement in our house that day, 72 years ago, when ‘Shazadi Sahiba’  was expected. My mother was in her best sari and father in his formal black achkan, with Mohammad Lone the head ‘chaprassi’ in attendance in his full livery – khaki turban with red fringe, a tall ‘turrah’ and scarlet sash with the State crest. As my father said, “We must not forget old times !”.

She came, striding up into our upstairs ‘baithak’ (a sitting-room now), and I retain a vivid impression of her imperious presence. She wore a silky ‘churidar’ with a long flowing ‘kurta’ and a circlet on her severely drawn-back hair. She had a ‘dupatta’ tied across her shoulder, ‘girl guide’ fashion and she leaned on a long knobby-headed staff with silver bands. She took tea with us, spoke kindly to us children, chatted with my parents and after doing her official work with my father was seen off in her ‘tonga’ ; she then lived in a cottage near the Mughal garden of Achhabal, not far from Anantnag. 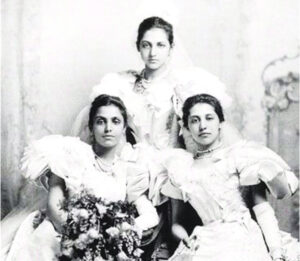 Princess Bamba (sitting left with flowers) with her sisters, Catherine (standing) and Sophia.

Born in 1869, she was the eldest daughter of Maharaja Daleep Singh, the last independent sovereign in the long history of India. Her parentage was as exotic as her long but sad life – her mother was part Abyssinian and part German. Princess Bamba went to Oxford for her university education – a rare phenomenon in the male-dominated world of 1880’s. She married an English Army doctor, had no children and lived out her later life in post-Partition Lahore.

There is a photograph of hers, taken in 1887, on the day she was formally presented at the court of Queen Victoria, Empress of India. The picture shows a slim, graceful teenager, holding up the long train of her court gown with one hand, white gloves above the elbow, and the other hand resting lightly on a marquetry table with a bowl of flowers- a typical Victorian setting. There is a proud carriage to her head, but a pensive and somewhat forlorn expression on her pretty young face – reflecting perhaps, the Queen’s farsighted and humane observation to Lord Dalhousie, the Governor General of India, “Nothing is more painful for anyone than the thought that their children and grandchildren have no future – how much more dreadful must be this for the proud people, who are the children and grandchildren of great Princes”. 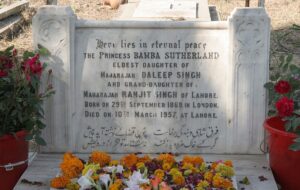 The inscription on the grave of Princess Bamba in Lahore read-

“The difference between royalty and servility vanishes,
The moment the writing of destiny is encountered,
If one opens the grave of a dead,
none would be able to discern rich from poor”.

Princess Bamba died in Lahore in 1957. Fakir S Aijazuddin (descendant of eminent Fakir ministers of Maharaja Ranjit Singh) in his book on Sikh portraits, records the pathetic plaint of the old lady that she could not get a seat in the local lorry (bus), when all the Punjab should have been hers. Her faithful secretary, Pir Karim Baksh Supra arranged her funeral in Gulberg Christian Cemetry in Lahore. No representative of Sikhs or the British was present; the old Punjab was left to claim its own !

(The writer is a veteran general of the Indian army)