The people from hill state of Uttarakhand watching the annual Republic Day parade being held at Rajpath, New Delhi were in for a pleasant surprise when they saw Prime Minister Narendra Modi donning the popular maroon Uttarakhandi Cap (Topi) that has been designed and made in Mussoorie.

Prime Minister Narendra Modi wore Uttarakhandi traditional cap and wrapped Manipuri stole on the occasion. The elections in both, Uttarakhand and Manipur states are going to be held next month.

PM Narendra Modi paid tributes to the martyred soldiers at the War memorial in New Delhi by wearing the Uttrakhandi ‘topi’ and also during the Republic Day parade that was first adorned by the first Chief Defence of Staff Late General Bipin Rawat, hailing from Uttarakhand, a few days before his untimely death in a helicopter crash.

The Chief Minister Uttarakhand Pushkar Dhami elated at the Prime Minister wearing the traditional cap from the state, said “ It is indeed a great honour for the state that Prime Minister Narendra paid homage to the martyrs at the war memorial and adorned it during the Republic Day parade.”

Sameer Shukla and his wife Kavita Shukla, who runs the ‘Soham Heritage and Art Centre’ in Mussoorie are the designers and creators of the Uttarakhandi cap said, “It is indeed a day of pride for the state that its traditional product in form of Uttarakhandi cap was worn by Prime Minister Narendra Modi.” 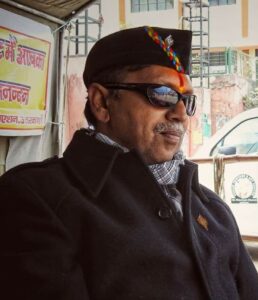 “We came up with the idea of creating an iconic product that depicts the culture of the state in 2017 and it was first launched on 26th January in the same year,” said Sameer Shukla the director of the Soham art and heritage center in Mussoorie.

The objective of creating a Uttarakhandi cap was to ensure that this traditional practice does not die, and the craftsperson and tailors could earn a livelihood from it, said Sameer Shukla.

“The first tailor to be engaged for the job was a dalit tailor Jagdam prasad and later we incorporated his son and relatives as the demand for the caps  increased,” said Sameer Shukla.

“We incorporated the Brahkamal, the state flower that has religious significance and offered to Lord Shiva at Kedarnath, along with four coloured stripes denoting different elements present in nature”, said Sameer Shukla.

Jagdam Prasad the tailor said, “The traditional topi style was on verge of extinction as my children were not interested to take it forward due to negligible economic return, but thanks to Sameer Shukla and his wife Kavita Shukla, the new designer topi became popular among the youth resulting in increased demand since 2017”.

Union Minister of state for Defence and Tourism Ajay Bhatt also was seen wearing the Uttarakhandi Topi on the occasion.

Late, CDS General Bipin Rawat was the first to adorn the Uttarakhandi topi when it was gifted to him by Sameer Shukla and later the same topi was worn by NSA Ajit Doval and various Chief Ministers and ministers from Uttarakhand.

“Wearing Uttarakhandi topi is the best tribute that can be paid to the iconic late CDS Bipin Rawat, the son of the soil,” said Kavita Shukla. 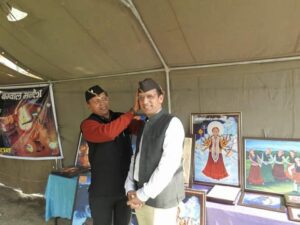 “We also thank the youth of the state to incorporate the traditional topi in their dressing style as its popularity will help the traditional tailors and motivate them to preserve their age-long tradition. I am delighted that the youth have accepted the Uttarakhandi topi and wearing it on daily basis, said Sameer Shukla”.

The flow of orders from various parts of the country has also increased as I am receiving a lot of queries about the traditional ‘topis’, said Sameer Shukla.

We are happy that our effort of several years has finally been acknowledged in the state, said Sameer Shukla.

Sameer Shukla was with the customs department and left the job to pursue his interest in preserving Himalayan customs, tradition and culture and settled in Mussoorie where he runs Soham art and heritage centre.