The year was 1909 when Leo Hendrick Bakeland invented a synthetic resin called as plastics,
which was hard and brittle. It was called as Bakelite a popular trading name which even today
is used in electric switches as a standard insulator. After the second world war Dupont
invented nylon and a new era began in the textile industry. With the moulding of PET jars in
the year 1970 plastic become a popular house hold name with a mammoth increase in the
use of non-ferrous materials finding its way from kitchen to drawing room , from streets to
motor industry and from earth to space.
The tailoring of raw plastics in different forms of consumables revolutionized the packaging
industry which found a cheap substitute in plastics. Its use though saved natural resources
yet it bred a problem of gigantic nature in the form of dunes and dumps of plastics tinting the
landscape with unimaginable shades of colours. Plastics had arrived along with the problem
of its scientific end use disposal.
Plastics are synthesized from gaseous monomers through condensation in the petrochemical
industries while refining the crude oil. They form long chains of carbon and hydrogen hard
to fragment or break. The remarkable stability of the substance is both a boon and a curse .
The long shelf period of food quality ,easy handling and low cost in transportation has proved
to be a blessing while the Satanic side refuses to obey the laws of nature in terms of
decomposition and disintegration. All plastics appear to be the same but hey are different
from each other in their composition and nature. The polymeric constitution is such that they
are non-compatible and as such have to follow a different path of recycling.

Chemical composition and end use of some commonly used plastics 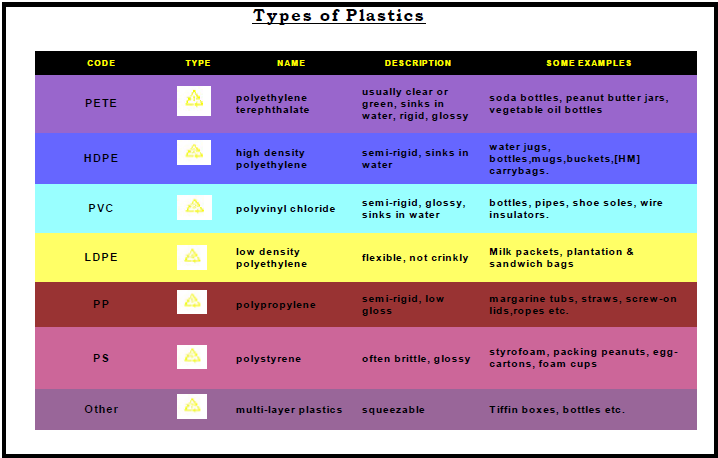 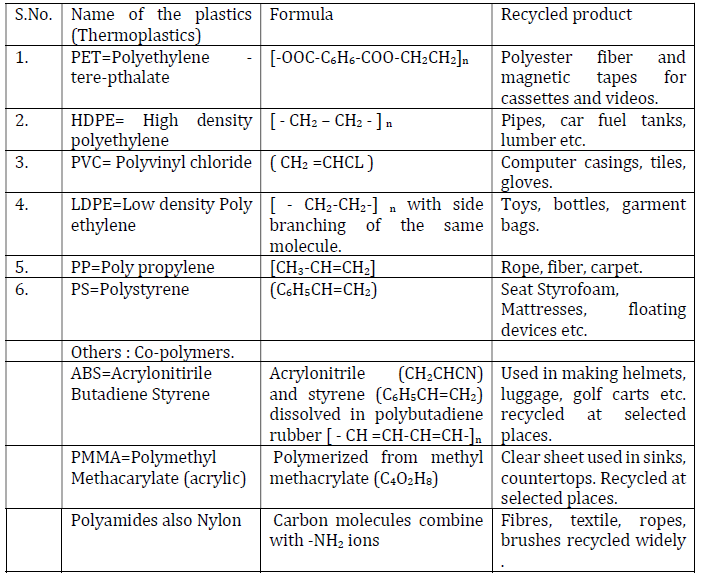 (Note; Thermoplastics = They can be repeatedly softened and remolded. The thermoplastics
can be easily handled through extrusion, blow moulding calendaring etc. They have a wide
use in packing industry and in our daily lives.)

The plastics commonly used for packaging purpose are called Thermoplastics as they
are flexible at normal temperatures. The Thermosetting plastics help in cross linkingof different plastics after heating to make durable and heat resistant materials. They
are used for orthopedic and dental devices. They cannot be melted and re-processed.
The Elasotmer plastics are amorphous with low cross-link density. They are highly
elastic and are widely used in bio-materials in cardiovascular and soft tissue
applications. They can be re-processed like the thermoplastics.
The range and array of plastics is so diversified that it is very difficult to identify them
from each other. The rapid growth of the plastic industry in post second world war
years has been phenomenal. However, the nearest point of urgent attention is the
contraction of land dump sites in urban areas which are overflowing with plastic
trash. The chemical stability and immunity to physical processes has further
compounded the problem of their disposal. The short cut methods of burning
unsegregated post consumer waste has the potential to cause irreparable damage to
the eco-system.
The plastic industry while expanding its domain in every sphere of life has treated
the environment as a market through propagating the message of saving the planet,
as a plastic use promoting strategy. The advantages in terms of resource and
energy conservation which are inherent in this miraculous substance has undeniably
made it as the most accepted material the world over. The element of durability which
is an additional advantage of this material has driven out the traditional house hold
gadgets. The terra cotta crockery which not long ago was widely used in ceremonial
get to gathers has been lost into oblivion and so are the artisans. Plastics have
survived outliving the traditional packing materials.
An another point in the asking is that why plastics like other packing material do not
have instant recovery form dump sites ? The answer to the same lies in the
indifference of the plastic manufacturers who do not support their own discarded
packings through value addition. The inherent advantages of metal and glass recovery
not only yield good returns but are also easy to be segregated. Plastics on the other
hand remain littered due to indifference on the part of the manufacturers and the user
alike. It is here that Plastics become villains form heroes.
The world is living with plastics and will have to continue living with them. The global
consumption of plastics the world over has touched the 200 million tons mark. The
scenario appears to be fearsome but there are ways and means which if adopted can
help in not only keeping the environment healthy but also help evolve a culture of
resource recovery and energy conservation. A multi pronged strategy encompassing
different components of plastic consumption and end use pattern needs to be evolved.
The short cut methods of incineration and burning will have to be done away with ,as
it reduces plastics to monomers. The process also leads to emission of dioxins which
are known carcinogens. Their entry in the human body through bio-accumulation in
plants and animals has been established by scientists.
The solution to the problem lies in recycling which though is complicated yet not
impossible. As a strategy all plastics are to be collected clean as far as possible
followed with segregation with linkage for end use disposal through recycling. It
implies that it needs to have a chain which is supported through value addition like
used paper ,metal and glass . It should also be ensured that there is a comprehensive policy for industries on “closed substance” cycle which guarantees the use of such
material which can be recovered and recycled. An another important issue is to mark
the plastics with a cryptic mark for polymer distinction so that polymer non-compatibility
can be taken care of. At a policy level it is essential that the polymer is
looked upon as a resource from “cradle to grave”.
In this new millennium it is all the more important to understand the delicate balance
between man and his environment. Use of any resource is nature’s bounty to man
,however, its misuse and over use leads to human triggered disasters which are far
more catastrophic than the natural disasters. It is high time that the “principle of
community environment protection liability regime”be encouraged for adopting
scientific waste management for conservation of resources. Management from the
top is always ephemeral and as such holistic principles of roping in the community
right from the grass root level is the need of the day. Legislation become a matter of
academic interest unless they are provided a fertile ground to breed and thrive. The
antiquated mind set has to be replaced with fresh thinking for keeping our landscapes
clean and healthy.

( Vipin Kumar is an eminent environmentalist who has worked in managing the plastics in the entire Himalayan region particularly in  Uttarakhand.)