The Uttarakhand Congress party has made a formal complaint to the State Electoral Officer Saujanya in this regard two days ago. The complaint was sent to the central Election Commission of India where, the officials taking serious notice of the development found it violative of the Election Code of Conduct. The Election Commission has asked the Uttarakhand BJP chief Madan Kaushik to reply to the notice within 24 hours.

Rahul Sharma, principal secretary of the commission said that in case no reply was received, the Election Commission will be constrained to take action.

Interestingly, the election campaign for the forthcoming state assembly elections had turned “islamophobic” with both the ruling Bharatiya Janata Party (BJP) and main opposition Congress party trying to show each other as more “pro-Muslim”. For the past three days, the BJP has tried to communally polarise the election campaign on the lines of neighbouring Uttar Pradesh where a no holds bar campaign is unleashed by the saffron brigade.

The BJP in Uttarakhand has launched a vicious campaign against Congress in particular against Former Chief Minister Harish Rawat terming him as pro-Muslim. The BJP picked up a statement of a small time Congress leader from Sahaspur  assembly segment who claimed that he has demanded a Muslim university besides other demands for his area for not contesting election as a rebel candidate. Harish Rawat has denied any such promise.

The BJP in it’s attempt to generate anti-Muslim sentiments had superimposed the photo of Harish rawat on the picture of Sir Syed Ahmed Khan, the founder of Aligarh Muslim University (AMU).

The BJP machinery also charged that Harish Rawat during his tenure as Chief Minister had given permission for “Juma” prayer during the holy fasting  month of ‘Ramzan’ for Muslim employees. 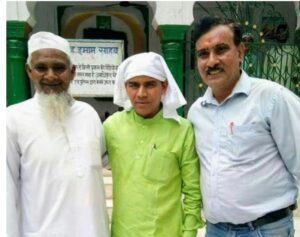 Interestingly, Harish Rawat, who three months ago himself had said that he was wrongly targetted by his political opponents for favouring a particular community and he did not permitted “Juma” prayers as was alleged. He said that it did cause him to lose the 2017 state assembly elections and dared his opponents to show any such government notification of leave for Muslim employees for ‘Juma’ prayers during ‘Ramzan’ month.

The BJP also came up with another morphed video where people at an election meeting of Congress were seen shouting slogans of “Allah Hu Akbar” in Sahaspur assembly segment having a sizeable Muslim population. The Congress party in its’ complaint to the police alleged that the video in question was morphed by the BJP IT cell as no such slogans were shouted in any of the election meetings. The Congress charged that BJP fearful of its’ defeat in the forthcoming assembly elections are trying to communalise the situation. “ The people are aware of the rhetoric of BJP in communalising the situation and wants answers to their problems of unemployment, mis-governance and corruption during the past five years,” said Sujata Paul, a spokesperson of the Uttarakhand Congress.

On the other hand, the Congress IT cell had also come out with a photograph of BJP cabinet minister and RSS ‘Parcharak’ Dhan Singh Rawat outside a mosque, asking BJP to explain why he was in a mosque with Muslims.

Interesting contest in the offing on Pithoragarh seat